State Highway 35 is one of Pearland’s principal commercial corridors.  In the Pearland 20/20 Community Strategic Plan, it was determined that the overall development potential of the corridor is held back by areas that do not meet present community standards.

One of the main strategies outlined in the Pearland 20/20 Community Strategic Plan is to optimize the development potential of Pearland’s principal commercial corridors. A redevelopment strategy for the SH 35 Main Street corridor from Beltway 8 to the southern corporate limits has been developed to build upon the Strategic Plan suggestions and provide the “big picture” strategic actions that are needed to encourage more investment in the corridor.

That portion of the SH 35 Corridor extends 7.2 miles from Clear Creek or the Pearland municipal boundaries on the north, to its municipal boundaries on the south, or approximately Hastings Cannon Road. Properties within the area include those located contiguous to the highway along its eastern and western edges, as well as a significant portion of the Old Townsite District.

To develop the strategy, a market analysis was completed, interviews and group meetings were held with stakeholders, and identified five catalyst areas with development concepts for those areas. The five catalyst concepts include:

One of the five catalyst concept areas identified in the Strategy is the Northern Gateway Entrance and Corridor Streetscape Improvements. By improving infrastructure and streetscape within the corridor, the image and sense of place, market appeal and overall taxable value of the area can increase dramatically.  To begin implementing this concept, a SH 35 Gateways & Corridor Enhancements Concept Plan was developed for the corridor, from Beltway 8 to Broadway. The concept plan focused on the entryway at Beltway 8, including two monument signs near Clear Creek, planting the medians with canopy trees, enhancing pedestrian areas at major intersections, and framing the roadway with smaller street trees along the right-of-way. In the Old Town section, the plan proposed creating a more desirable walking environment by extending the sidewalk to the back of the right-of-way adding shrubbery as space in the road right-of-way allows.

A steering committee of businesses and corridor stakeholders met to provide feedback on the concepts, which accommodate the limitations presented by the varying existing conditions, such as slope paved ditches, power lines along the road and narrow road rights-of-way.

This project was funded and will be maintained by the PEDC.  The construction budget for the project was $6.2 million.

The following items were completed as part of the project:

Tree relocation – 38 pre-existing crape myrtles from the SH 35 medians were salvaged and replanted in medians along McHard and Barry Rose where irrigation already existed.

Tree and Shrub Plantings – Over 800 trees and 13,000 shrubs were planted along the ROW and medians throughout the corridor.

Irrigation – Water meters, mains, laterals, drips and sprays, and bores to medians were installed throughout the corridor.

Median Concrete Demolition – Concrete under the center medians was removed to make way for additional plantings of trees, shrubs, and ground covers throughout the corridor.

Tree Wells and Trenches – sections were removed from the back slopes of concrete ditches for tree planting wells, and trenches were excavated along existing railings for vine plantings.

Tree Plantings in ROW – Eagleston Holly trees have been planted in tree wells under paver grates through the Old Town section. The trees are an urban variety that fit well in tight places and will only grow to 10-12’ in height, so they will continue to fit within their surroundings. A concrete curb was installed along the back of the right-of-way that follows the height of the adjacent ground to create a clean edge.

Pavers – The old pavers were removed and stored while a concrete base was poured to provide a stable base for the pavers to be reinstalled upon. 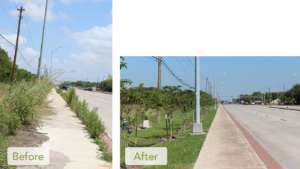 Entryway at Beltway 8 – Two 24’ Pearland monument signs, planter walls with stone veneer, landscaping, and irrigation were installed on both sides of the road at Beltway 8.

Concrete Ditches – Portions of concrete ditch were removed, filled and planted with trees on the north end of the corridor.

Tree Plantings in Easement Areas – Cole’s Flea Market, PISD, Busy Bee, and Texas First Bank all provided landscape easements to make room for additional enhancements beyond the right-of-way. Both of the easements in front of Cole’s and PISD have had concrete removed and trees, bushes and grass installed. Both Cole’s and PISD were lined with new curb around the easement area.

Broadway Intersection – 18’ Pearland signs were installed on the northeast and southwest corners and all four corners were upgraded with new pedestrian plazas and ramps, seat walls, landscaping and irrigation. 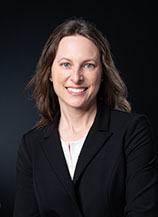 Valerie leads the implementation of PEDC’s efforts on new development, redevelopment, and beautification projects, with focuses on Lower Kirby and the city’s major thoroughfares. She works with property owners, businesses, appraisers, attorneys, engineering, planning and environmental consultants and contractors to complete infrastructure improvements and beautification enhancements.

Valerie leads the implementation of PEDC’s efforts on new development, redevelopment, and beautification projects, with focuses on Lower Kirby and the city’s major thoroughfares. She works with property owners, businesses, appraisers, attorneys, engineering, planning and environmental consultants and contractors to complete infrastructure improvements and beautification enhancements.